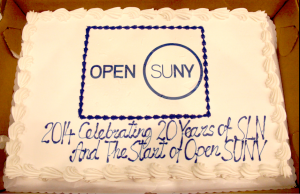 In 1992 the Alfred P. Sloan foundation launched a new initiative to fund projects for developing college-level courses using digital networking technology the purpose of which was to explore educational alternatives for people who wanted to pursue higher education but who could not easily attend regularly scheduled college classes.  Conceived by Ralph Gomory and administered by Frank Mayadas, the Anytime, Any place learning program awarded 350 grants totaling more than $70 million. Twenty years later, online learning and its off shoot blended learning have become a basic aspect of American higher education.

From 1994- 1998 SUNY received a series of grants totaling 4.1 million dollars from the Sloan Foundation that resulted in the SUNY Learning Network and 20 years of excellence in innovation and  online teaching and learning.

Today we celebrate this anniversary and honor the campuses, staff, faculty and our special guest that have all contributed to and played significant roles in this significant achievement.